Similar to how some folks celebrate Kwanzaa or Presidents Day, we pot heads love a good made up holiday. That’s why April 20th of every year (4/20) is our celebration of all things cannabis. It’s our time to regale ourselves with weed, to suspend this reality where weed legality is an afterthought. It’s a time where even the most timid of us stoners will stick it to the man and smoke openly in our favorite park or on the steps of our local city hall. Dammit it’s a time for us weed smokers to come out of the canna-closet and be proud for who we are–cloud blowing degenerates.

Therefore KushCA is listing some of the most popular 42o celebrations in the San Francisco Bay Area. If I missed something, shoot me a message and I’ll be sure to update the list! 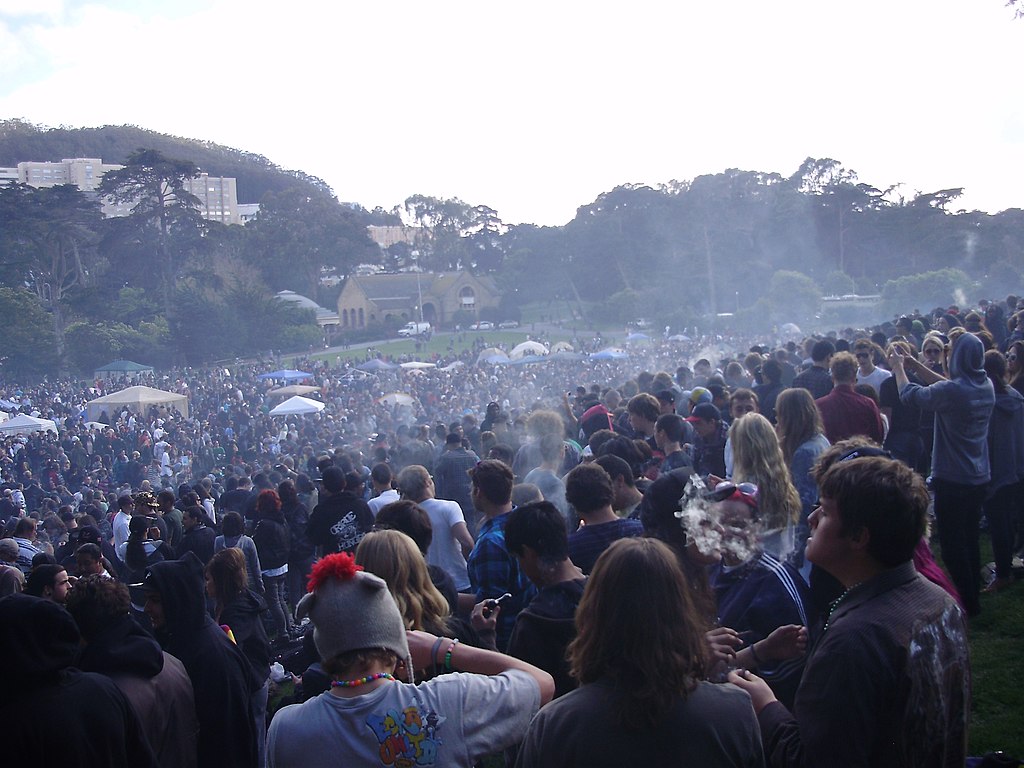 The city of San Francisco has never officially issued a permit to host 420 on Hippie Hill, but every year, like clock-work, smokers from all over the Bay Area-nay, the world, show up to smoke until their hearts content. The event costs The City anywhere from $80,000 to $100,000 per year to pay for the additional help from city agencies. With all that money being invested, it begs the question, is the event even legal?  (Short answer: Hell no). But does the city even care? Of course not, this is San Francisco. And anyways, what could the city really do when thousands turn up on Hippie Hill in Golden Gate Park on April 20th each year for a giant smoke out?  Let’s just hope the Trump effect doesn’t fling this far.

Some things to keep in mind if you plan on attending this years 420 fest.

WHAT: THE 420 GAMES SAN FRANCISCO

You may still posses the image of the lazy, inert stoner only managing to break a sweat when running form the po-po, but in reality many cannabis smokers are healthy and active. The 420 games are a great event for all who want to exercise, listen to some dope beats and partake in two one of the fastest growing industries in the world (I’ll give you a hint, one is health and wellness).

Starting Saturday morning at 9:00am, 420 gamers will take a trip from the Music Councourse at The Spreckles Temple of Music heading along John F. Kennedy, around Stow Lake, and back to the Concourse, for 4.20 miles of exercise before the main Event! (Event is located in Music Concourse area).

After the 4.20 mile course, join the staff of 420 Games at The Music Concourse Bandshell, where they will have 2 hours of Beer Tasting sponsored by Lagunitas from 11am to 1pm, enlightening music, educational speeches, some comedy stand-up, and industry sponsors and exhibitors. Event at Golden Gate Park ends promptly at 2pm.

This celebration is new to me, therefore I have no snarky witticisms to add to my review. All I can do is encourage you to go, because 1) there will likely be a larger contingency of black and brown folks involved in the cannabis industry and b) refer to point a.

The Folks at Hood Incubator not only want you to smoke out, they plan on feeding you too. Enjoy a FREE BBQ, DJ, Arts & Craft corner, live cypher ft. The Oakland Mind, and cannabis policy/industry update from The Hood Incubator Founders.

Please keep in mind that The Hood Incubator is a non profit  in the midst of fundraising to support their programs. The goal of The Hoof Incubator is to increase the participation of Black & Brown folks in the cannabis industry. The 2nd Annual Community Gathering is 1 key way they plan on bringing community together over music, food, & cannabis.

But even Mary Jane is a capitalist. So before you go sucking or licking yourself off in anticipatory glee like you’re a stoned Linda Lovelace heed the following prices:

FREE GIFTS and SAMPLES will be provided for every ticket owner.

Casual Smoker: $79.99 Comes with a gift of an eighth (top shelf) or an edible bundle.

One person will win the ULTIMATE 420 gift basket.
There will be LIVE music, mechanical bulls, Smoke Filled human hamster ball and more.
Event Location is will be announced the day before.

The 7 Most Visually Pleasing Dispensaries in San Francisco & Oakland

10 of Your Favorite Rappers Who Don’t Smoke Weed

8 Herbs From Your Backyard You Can Vape