It may seem I tout the delivery service Eaze a lot on this site, which I probably do. And that’s a shame, seeing as I have only used them once or twice. The company I use primarily for my delivery needs, and who seem to bear no vocal issues with my oh so far out locale *cough, cough Purple Star* is Herbal Relief Collective.

Now I will be honest. I only stumbled upon them after devouring review after review of collectives on Weedmaps which accepted Credit Card. The fact that such a thing exists is simultaneously one of the greatest and most dangerous things that could happen to a marijuana glutton such as myself (a.k.a pothead).

Initially I was reluctant to order from them. They boasted good reviews but didn’t boast any of things I like, which is a healthy assortment of hashes and waxes (currently they only feature wax concentrates). I checked out a few other collectives before I realized I had been on my computer for hours reviewing weed delivery service products like I was contemplating a complex order of Dim Sung, Wonton Soup and Pot Stickers from Yao’s House of Rice.

So I quickly signed up to them because they were the one collective whom I felt the most, I don’t know, connection with? I was surprised as all hell when Herbal Relief Collective responded within 30 mins to confirm my credentials and welcome me aboard.

At this point I have used them more than a few times and couldn’t be happier. If they’re still around in 13 years I will be inviting my favorite delivery driver, Nicholas to my son’s Bar Mitzvah and will most certainly be paying their kids private school tuition. Okay on to the PRO’s and CON’s of the place…

PRO: I’m ALL about personality. Personality goes a long way. If your staff is aloof, noticeably high or just not that friendly, people notice.They may still engage with you, but they’ll do so reluctantly, and if another place comes around with a more affable, engaging staff they will most certainly tell you to fuck off by not soliciting your spot anymore.

Herbal Relief Collective stays in contact with you from the moment you submit your order up until the moment your delivery driver arrives (which has ALWAYS been under an hour). When your order is 15 mins away HRC will shoot a text with a freakin’ GPS track of your driver. No more waiting with bated breath by the telephone for your weed man. Now you know exactly where they are. I’ve always had the pleasure of getting my orders from Nicholas, whom the other day I gave some homemade fried chicken to. If I ever give you chicken, just know that I like you too.

PRO: Product. Yes I know I was talking smack earlier, I’m just particular when it comes to my Cannabis that’s all. But HRC not having hash on stock does not remotely diminish from the VARIETY of waxes they’ve  got for you (as well as a supple supply of Sativas and Indicas). Many of these I will feature in KushCa’s Strain Reviews: 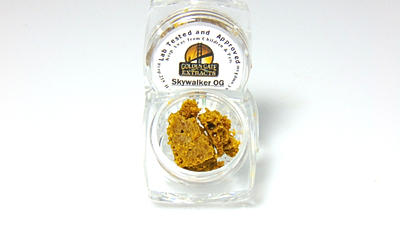 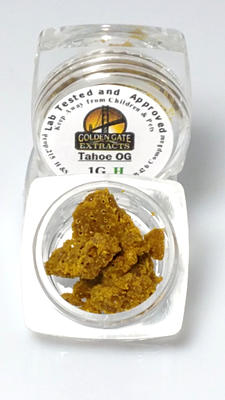 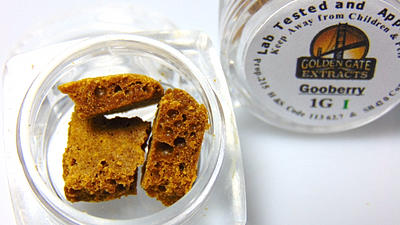 PRO: Deals. Goddamn I love a good deal. Especially when the end results is somehow me having more marijuana. When I first signed up to HRC they offered  the choice of  a complimentary Glass Jar with either 1 gram Flower and rolling papers OR 1.5 gram wax and a concentrate tool. I choose the latter and use them both EVERYDAY (talk about a gift that keeps on giving). 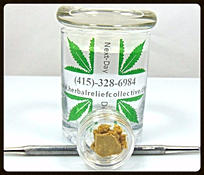 While they don’t have BOGO like another one of my other favorites, Purple Star MD, they do have daily Budtender Specials (%10-15 off select strains) and 2 grams of wax for $50 or a  “mix-and-match” type deal, where one can get three .5 grams for $40. Similar to Purple Star they have a  “loyalty program” with .5 points applied to every $1. When one reaches 400 points they are eligible for three .5 grams of wax or an 8th of Top Shelf flower.

And while I love a good reason to complain about a dispensary the fact that I bought an ounce of shake from them a few weeks ago (and which I have been merrily smoking on since) has shut my fucking sweet potato pie-hole for good. I mean, $40 worth of weed lasting someone like me more than 3 weeks…well you  stay gold Herbal Relief Collective, and don’t let nobody soot your shine.

CON: Okay, I can’t let anyone off the hook that easy.  While HRC is slowly becoming one of my favorites I initially thought someone just learning HTML in 1999 had developed their website. My opinion would be update the layout, lose  the garish green color and you’ll do just fine.

Where to Buy Recreational Weed in the Bay Area